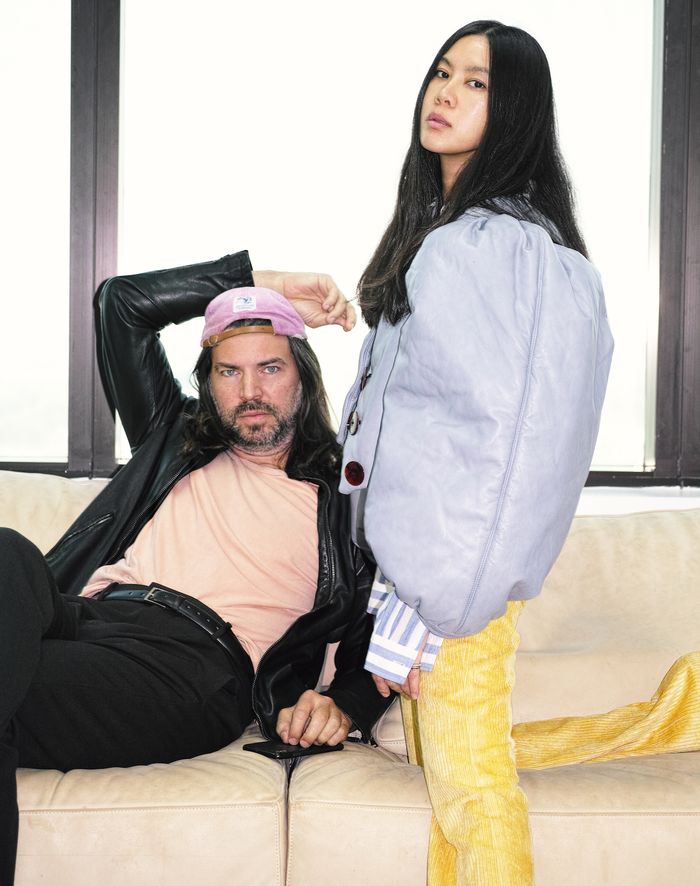 We spoke with Jesse Dorsey and Wannasiri Kongman, the designers behind the cult handbag and accessory brand, BOYY, about the brand's history and ethos.

Hello Wannasiri and Jesse. Thanks for taking the time to chat with us. BOYY seemed to arrive fully formed out of nowhere. How did it all begin?
JD
We met and launched BOYY in New York City in 2006. Wannasiri really brought me into her handbag obsession - we would notice them on the street and study them together, almost obsessively. I, a career musician up to that point, was intrigued by the chance for us to create and develop something together - and BOYY was born. But after a few collections we decided to relocate to Bangkok, Wannasiri’s hometown. At the time, it was not a city that was on the radar in terms of fashion or luxury. We were sheltered - which allowed us to experiment and really develop the brand, try things and see where we wanted to take it. We were very fortunate and had years of growth and success in Bangkok by focusing on retail, and by the time we left, you could say we had nearly a decade of incubation in a bubble outside the typical fashion circuit. So I guess now that we’re hitting the international scene, it could seem as though we came out of nowhere ‘fully formed’ as you put it, but in fact we’ve been at it for nearly two decades.
One of your guiding principles is that "all designs must be rooted in artistic direction rather than necessity” could be viewed as somewhat controversial. Do you think we actually need more stuff despite the fact it may be pushing design?
WK
We look at it the other way - to us, the only thing worth spending money on is design. When you invest in design, you are investing in something non-disposable. Committing to something. When you don’t, you end up buying stuff much more frequently. The lifespan of good design is equal to 20 lifespans of poor design. But beyond that, design and utility are not mutually exclusive.
JD
It’s really how we live our lives - as an example, I like to buy old cars and restore them rather than contributing to the overproduction of new things. You could argue that older cars are less energy efficient, which is true, and is why I’m now researching how to convert them to electric... there are a few guys doing this type of thing in southern Italy and I’m convinced it’s going to become a much bigger industry. When you aim for timeless, you rid yourself of superfluous.
When I first saw your work, I was reminded of the Minimalist from the modern era. Tell me, whom are some of your influences? Art, fashion or otherwise.
JD
We have many influences, we like to try to imagine extracting the essence of various arts, from music for example the Leonard Cohen Greece years, sculpture : Constantine Nivola, painting; too many to mention as well as architecture; detailing of Carlo Scarpa and design with a capital D from Ettore Sottsass to Josef Hoffmann. Most importantly we compound the serious with allowing our more playful childhood nostalgia to seep into the mix.
When designing, what are some of the “imposed boundaries” you uphold?
JD / WK
Generally we try to have no restrictions, especially on creativity. During the first wave of the pandemic, when our supply chain was hit (like most everyone’s) we took an experimental approach to upcycling and christened it ‘BOYY UP’. For the BOYY UP project, we limited ourselves to only using stock products or raw materials to create new, wondrous and beautifully designed objects.
Your AW21 campaign by Jim Goldberg draws on his seminal work Rich and Poor which explored the themes of the title. But for BOYY, gender identity is explored as a reflection of your “gender fluid” design. Do you have a specific gender in mind when you design?
JD / WK
The truth is that some designs we think women, and some are truly are genderless.
Why should someone buy one of your bags?
JD
We’re always humbled and grateful when someone appreciates our design and aesthetic to the point of making a purchase, but our focus is not so much on convincing people to buy BOYY as much as it is on designing and creating beautiful things. With that said, we’re an independent brand, not backed by any big conglomerate, and that we’ve built everything ourselves from scratch. There’s a strong entrepreneurial spirit to our brand and if people identify with that, that’s cool.
What is the most important quality a designer can have?
WK
A designer should strive for balance and keep an open mind, acknowledging and accepting their weaknesses in order to improve and get better, instead of succumbing to them.
What’s next for BOYY?
JD / WK
We have some pretty exciting lines/concepts we’re working on outside of leather goods, hang tight...